It's getting harder to remember everything that's been going on in the two weeks between posts - I seem limited to one per "good" week lately. 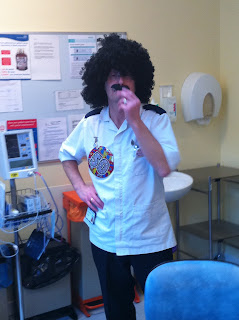 Jasper has left the chemo team :o( but he's off back to Australia with his wife.  I'm not sure how long he'd been back, but whilst he's been doing my fornightly PICC flushes since October last year he's become part of my life. I was on the ward rather ill a few weeks back when it was his 50th birthday so I popped in to wish him the usual and this is how he was dressed.  Jasper wasn't born a Jasper - but his brummy accent earned him a nickname that stuck.

I thought about him again (he's only been gone a week) yesterday when the lady in the bed next to me had a surprise visit from one of her 8 children all the way from Australia - most of her kids had brummy accents but the Ozzy one managed to get stuck in the lift for 40 minutes during his visit.  That's the sort of thing that happens to me - so I kinda found it funny but I'm twisted like that.  He's here for a month anyway and she's in her 80s and has a cancer she'll die with not from - the scales are never quite balanced are they?

I've had some more problems with stuff coming out of places it shouldn't and saw my surgeon who wasn't really aware of bioprosthetic plugs - but I'm definitely on the MDT in a few weeks to be discussed with some research into this.

I've had 7 chemo treatments of this regime, but only 4 post surgery so only those count.  Two more before I get a scan to see how it's affecting the squatters in my lungs and liver.  Four weeks.  One month.  Only.  Every time I'm in hospital for it I think "I can't do this again".  But I have and I expect I will do two more.  I just don't think it's going to be enough to give me a good break because my CEA is still just above 30 and it was down to 4 again.  Sigh.

So meanwhile I've been making a few more bracelets/necklaces to keep me out of trouble.  Here's some of my favourites:

Last, but not least I managed to guest post on mumsthatwork.com which feels like grown up stuff to me!  Carole is also a guest poster, still being a hands on mum - Carole's blog is in my following list on the right.
Posted by Loopy at Saturday, April 02, 2011 7 comments: