I'm often taking photos of things, mostly they get deleted - here are a few I've taken lately that make me feel glad to be here:

I've even been logging my sightings the last few days on the http://www.bigbutterflycount.org/ which I found when I was looking up the Speckled Wood.  I've got a phone app to identify birds because I'm ashamed to say I wasn't too sure about some of the common bird names - at least I know a wren from a sparrow now!
You might think it's a bit late to be going back to school over basic things but if I see something I at least want to know what it's called - and really every day should be a school day or our brains will seize up.

Scan day. My "take a couple of months off and we'll do another scan and review the situation" scan. It was baking hot again, lovely. Top down in the car and a book to occupy the time. Drinking time is now reduced to half an hour, not an hour. Seems a couple of patients have brought two visitors to keep them company taking up nearly all the seats, good job I scan alone isn't it? Mandy checked me in, the usual questions and I chose blackcurrant - instantly regretting the taste of saccharin sweetness. Should have gone for plain water but a whole jug of water is even harder to get down in half an hour.

The nurse called me through to be cannulated and asked how my veins are, I pointed to the three scars inside my elbows "PICC line, PICC line, PICC line....". so just the one option then. It took her a couple of minutes to get it sited, because once it was in she seemed to have hit a valve so no blood was flowing and it felt rather uncomfortable as she wiggled it about and I could picture what it must look like, the battering ram of the needle pushing at locked doors. I'd forgotten my crack lollies for the lying down pain - last time she quizzed me about what I was going to do with it. Luckily I'd increased my own dose on Saturday with spare patches from the last dose increase the week before which didn't work. I was now on 100mcg an hour. (Since increased  and now on seven milligrams a day - equivalent to 70 of morphine a day). For pain which nobody can definitely identify.

I sat next to an old man who was next to an old woman. Feeling young and old at the same time. "Lucky you brought a book with you" he said
"Been here too many times to not bring one"
"So you're an old pro are you?"
"Yeah something like that....."
Afterwards I thought maybe I should have talked to him in case he wanted reassurance but I had been interrupted halfway through a chapter to be cannulated and was trying to catch up and not lose the thread. I caught a look at his watch - nearly 3 already and I was after him, plus had to be at the surgery for 3.40. I was never going to make it.

Two emergencies were taken in before us - I've been one of those emergencies February 2008. When they took my sick bowl away from me and as a result I threw up dark green bile and contrast fluid all over the door frame and floor on my way out. It was after that I had the delights of the NG tube. I stared at the floor - no trace there now of course. That must have been a bitch to clean up...

The nurse who called me in, just before another patient was almost wheeled in on his bed recognised me. "I remember you, you were shaking and shivering you were so cold last time". She fetched a blanket straight away. Then the most annoying question to a patient like me EVER "NO, I AM NOT OR CANNOT POSSIBLY BE PREGNANT". The cannula nurse had asked them to keep my left arm by my side as she'd had to use such a small needle and it was short - she was worried it would fall out. I still had to raise my right arm though. That scan is going to look odd. Thankfully I wasn't there long enough for pain to kick in. I got dressed the second I was out of the scan room and got my car keys, ticket and disabled badge ready to hot foot it out of there. Mandy spotted my keys and I think that got the needle out a little quicker than the usual 15 minute wait. I sort of skipped/jogged to the main entrance, I can't run but walking was too slow. I was out of breath by the time I got there and of course with 12 minutes to my appointment the receptionist was training another woman so took her time.

I rang the surgery and they put a note on the screen to say I was en route. I thanked Dr B for waiting and told him my pain relief still wasn't working at night but had got unbearably bad the last couple of months. I told him I'd increased my dose again after the last Dr's increase to 75 and it had improved but still wasn't working. I asked if maybe it was worse lately because the fistula has shrunk and there is a build up of mucous and waste from retractions post chemo which could be causing extra pressure to my theory of scar tissue causing the original pain. He agreed with my theory after examining my bones and tummy, noticing things were a bit backed up at the moment - they were, I'd eaten a mountain of veg and no movement for 24 hours. I asked if he thought the pain was getting worse or that I was just used to the drug. He said it really was a hard one to answer but hopefully when I have the next surgery they can clear out the redundant bit of colon, maybe cut away as much as they can and then I'll have minimal build up to worry about. I daren't hope that if/when that happens I can drop the dose again. I have no desire to spend the rest of my life doped up on controlled drugs. He settled on a new dose of 125mg patches.

I waited for a few minutes for the prescription to be made up - only to be reminded that they don't stock controlled drugs in the surgery. I live too far to have to go to a pharmacy, yet there is a pharmacy next door so the convenience is only that I can save time queuing in the pharmacy usually after a consultation that needs a prescription. While I was waiting I noticed a magazine....now I know they have a reputation for having old reading material in waiting rooms but seriously. 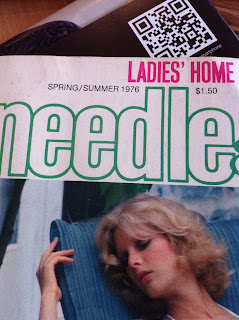 Thursday marked a year since the phone call that changed my life forever - the one where I was told instead of a tumour at the base of my spine or in my pelvis there were in fact tumours all over my lungs and a couple in my liver. A year of blood tests, scans, countless stays in hospital, surgery, emergency admissions, chemo, agony, bodily waste coming out of places it shouldn't and not where it should. A year where the man I loved made his choice and I wasn't it. Many, many weeks of being alone day after night after day alone with my thoughts. But it was also the year my kids came closer, growing up at the same time and giving up their time to keep me company. Where well intentioned plans to "do things" fell by the wayside as inevitably do. A few hardcore friends surprised me with their continued ability to keep me going - visits or calls that aren't made out of pity or duty. Spending time with people who understand my limits but don't draw attention to them, work around them, don't give them recognition so even I forget for a few hours.

The hard times are those I'm expected to dwell on my situation, to bemoan my lot. I'm not interested in how hard things are or have been I'm interested in right now, this minute. Why worry about what could have been? Taking advantage of everything. Am I in pain? yes - so I need to do something distracting, read a book, play a game on my phone, make something, study the birds and the insect activity in the garden. I don't need to sit (or more often lie) and concentrate on the pain, to give it recognition and let it take over.

It's hot, wonderful, I can spend most of my day revelling in the sunshine and listening to the birds, checking their nests, watching the butterflies, admiring the many shades of green in my garden, the flowers, I've even fed honey to bees who get locked in at night and are too weak to fly. Have you ever seen a bee feeding up close? No neither had I until I got cancer. Nor did I know that an admiral butterfly has a fluffy body - that I can still remember the common varieties from primary school I'm glad but I've taken to examining up close every insect that comes into the conservatory. Black jackets are like black and white wasps or hornets but they buzz quietly, have a pearlescent sheen to their bodies. I didn't know that before I got cancer.

It's raining - great I can curl up and listen to the rain on the perspex roof of the conservatory and read more books under a blanket with a mug of tea. I can make something with clay knowing it won't dry out before I've decided what I'm doing

Why are we never happy with the situation we're in, always looking for something better, but not in an ambitious way, in an ungrateful way? I don't know, but that's how I spent over 35 years of my life. I finally, really understand "stop and smell the roses", I get it. I don't just understand it, I feel it, I live it. There is so much wonder in this universe, even in the small patch of land I occupy, so much life. So here's to another year of enjoying it.
Posted by Loopy at Tuesday, August 02, 2011 3 comments: