www.loopyloobyloo.weebly.com
Posted by Loopy at Saturday, March 17, 2012 No comments:

Lisa was born on 28th October 1970 to Bryan and Dorothy Hemm at Kings Mill Hospital, Sutton-in-Ashfield. Dorothy and Lisa moved to Lincolnshire in 1974. Having attended Westlode Primary school in Spalding, Lisa passed her 11+ and continued her education at Spalding High School from 1982-1987, achieving 10 O’levels and beginning a Btec business studies course. Whilst living in a bedsit in the former Saxon King public house she met her future husband, Rob Almond. Due to a change in regulations Lisa was left with no option but to give up her studies to work full time on the YTS scheme at Maples Solicitors before taking a job at S.H.D.C, offices, helping to implement the new community charge.

Lisa married Rob on 27th May 1989 at Spalding Registry Office. In 1992 she gave birth to still-born twin boys (Alexander & Elliott) at 24 weeks at her home in Surfleet. A beautiful, healthy girl (Karys) was born in 1993 followed by a miscarriage at the beginning of 1994 (Jamie – 12 weeks) and finally a strong healthy boy (Phoenix) in December 1994.

Lisa went on to work at Geest for 3 years, first as a transport clerk then as a production planner. In 2000 she began work for Frontline: 3 years in logistics, 2 years in commercial accounts before finding her niche as an analyst, continuing for another 4 years. She enjoyed travelling and spent some memorable holidays in Rome, Thailand and France.

In January 2007, after several frustrating GP appointments, Lisa was referred to Pilgrim Hospital, eventually being diagnosed with stage 3 bowel cancer. She underwent surgery followed by intensive courses of chemotherapy and radiotherapy and despite the physical complications of surgery she lived happily tumour-free for 3 years.

In June 2009 Lisa did a parachute jump in aid of Beating Bowel Cancer raising £914. http://www.youtube.com/watch?v=vGurOKs3CWQ

Following a scheduled scan in 2010, more tumours were discovered in her lungs and liver. Despite further treatment and more corrective surgery, the tumours increased and spread finally defeating her physically but never in spirit on 8th February 2012.

Lisa is survived by her 2 children, Karys(19), Phoenix (17), , sisters Rebecca, Deborah and Lavinia and her mother Dorothy Rogerson.

Lisa was an incredibly strong person, able to laugh at herself – she would help anyone if she could. A loving mother to 2 wonderful adults. For her, there was no such word as “Can’t” – she was prepared to attempt anything. Pragmatic, determined, loving, generous, brave and so incredibly proud of her beautiful children, loved and respected by her friends and family, forever remembered in our hearts.
Posted by Loopy at Wednesday, March 07, 2012 3 comments:

Quite possibly the hardest thing I've ever had to write, but here goes:

On an unseasonably warm february morning, 80 or so of us gathered to celebrate the extraordinary life of Lisa Almond. The order of service was chosen by her children, Karys & Phoenix: 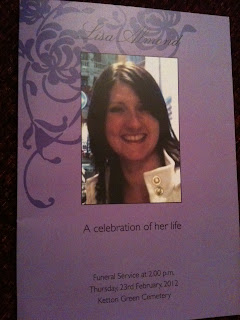 She was carried to her final resting place by Katie, Hayley, Maurice, Debsi, Phoenix and Phil - in a wicker casket decorated with evergreens, thistles, lavender and white roses, to the sound of Kite by U2.

Her younger sister, Beckie, read out the following passage by Khalil Gibran:

Let me sleep, for my soul is intoxicated with love,
And let me rest, for my spirit has had its bounty of days and nights,
Talk not of my departure with sighs in your hearts;
Close your eyes and you will see me with you forever more.
Carry me upon your friendly shoulders and walk slowly to the deserted forest.
Cover me with soft earth and let each handful be mixed with seeds of jasmine and lilies,
And when they grow above, they will breathe the fragrance of my heart into space,
And reveal even to the sun the secret of my peace.

This was followed by tributes from her dear friends: Maurice Lane & Deborah Puxty Ward,
and the song "Wherever you will go" sung by Charlene Soraia

Further tributes from Hayley Gilks and Katie Withers were followed by the commital by the funeral celebrant Nicola Dela-Croix, ending with "Love Cats" by The Cure

Lisa wrote some final words to be read out:

I may not have had the easiest life, but nothing worth having is easy. And I got the best, my two beautiful children. They are what I've left for the world, and i know it is a better place for having them in it. I could not be more proud of them for how they have dealt with my illness at critical times in their education and childhood.
Just because I'm no longer physically present in the conventional sense, doesnt mean I've gone. Everything I am, all the elements my body is made from, will be absorbed back into the earth, into the universe. So I'll be around always.
Don't sit in traffic getting stressed, look at the sky, the trees, the birds, let people in from side roads and make someone else's day better - it's the butterfly effect.

Know yourself, know your body, and take care of both......


That's the nuts and bolts of what happened but it's not the full story - how can I possibly describe the grief we all felt, the tears, the regrets, the deep chasm that she has left? Some strong bonds have been formed these last few weeks, between the people she has left behind - but we are all too aware of the one person missing from our group. This proud, independent, courageous and clever woman will never be forgotten.

I'll leave you, as she would have wished, with a smile on your faces: 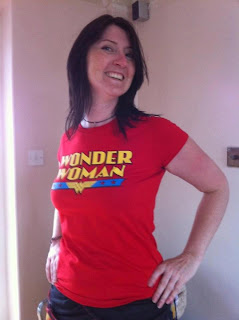 Wonder Woman is a warrior Princess of the Amazons (based on the Amazons of Greek mythology) and was created by Marston, an American, as a "distinctly feminist role model whose mission was to bring the Amazon ideals of love, peace, and sexual equality to a world torn by the hatred of men." [2] Known in her homeland as Diana of Themyscira, her powers include superhuman strength, flight (even though the original Wonder Woman did not have this ability), super-speed, super-stamina, and super-agility. She is highly proficient in hand-to-hand combat and in the art of tactical warfare. She also possesses animal-like cunning skills and a natural rapport with animals, which has been presented as an actual ability to communicate with the animal kingdom. She uses her Lasso of Truth, which forces those bound by it to tell the truth, a pair of indestructible bracelets, a tiara which serves as a projectile, and, in some stories, an invisible airplane.
Posted by Loopy at Sunday, February 26, 2012 4 comments: